35 TAMPA BAY RESTAURANTS TO TAKE AN OUT-OF-TOWNER, AND WHAT TO GET
Brandalynn Nuñez Cepeda and Sofía García Vargas, Creative Loafing, March 10, 2022

Al’s Finger Lickin’ Good BBQ
What to get: Doesn’t matter, as long as it’s a collard green day
1609 Angel Oliva Senior St, Ybor City, 813-956-0675
"From concession stand to sit-in staple, the people of Ybor hold nothing but high praise for the Tennessee-style BBQ joint. From ribs, and pulled pork, you really can't go wrong here, but a safe bet is always the daily specials."

Join us as we celebrate the Grand Opening of our new soul food restaurant, Al's Finger Licking  Good Soul Food, on Saturday, 12/15/18 (12-4 pm). Free desserts (while supplies last), live entertainment and prizes! Also, don't forget to like both of our restaurants on Facebook! Thank you again for all your continued support and patience!

TripAdvisor has awarded us a Certificate of Excellence once again! Thank you all for your continued support!

AL'S NAMED FLORIDA'S BEST BARBECUE JOINT!!!
THE BEST BARBECUE JOINTS IN ALL 50 STATES
Garin Pernia, Mental Floss, June 9, 2016
The key to great barbecue is to keep it simple: meat slow-smoked over wood. America’s barbecue scene is diverse, ranging from roadside shacks to full restaurants serving craft beer and brisket. Many barbecue joints create an admixture of styles from key cities like Memphis, Kansas City, and St. Louis, and states like Texas and the Carolinas. And even though the meat is the star of the show, what would a good barbecue meal be without a few solid sides? Here's our roundup of the best barbecue joint in every state.

FLORIDA // AL’S FINGER LICKING GOOD BAR-B-QUE  Location: Tampa, Florida
Menu items like Terrance's chopped beef, Aunt Nita's black-eyed peas, and of course Al's ribs give this family-run barbecue joint a personal touch. It all started as a concession stand in 2003, but now Al's is housed inside a bungalow in Tampa's historic Ybor City neighborhood. Al’s expertise centers on Tennessee-style dry rub and tomato-based sauce, good enough to be named one of Yelp’s top 10 best restaurants in Tampa Bay. Try Tia's TGIF Mac and Cheese, named after Al's daughter and served Fridays only.
​
THE YBOR ISSUE 2016: DINING, DRINKING AROUND THE DISTRICT
Everything from seafood, Cuban coffee and sandwiches to crepes, craft beer and Italian favorites.
By Ainhoa Palacios, Creative Loafing, April 14, 2016

Al’s is one of Tampa’s most highly rated barbecue joints. Located in Ybor City, Al’s serves some of the very best barbecue that you’ll ever find, all done with a smile and strong dose of southern hospitality.
13 BBQ JOINTS IN FLORIDA THAT WILL LEAVE YOUR MOUTH WATERING UNCONTROLLABLY
OnlyInYourState.com, September 8, 2015

Al's Finger Licking Good Bar-B-Que - "If you're in Tampa with a hankerin' for some BBQ, head to Al's in Ybor City. The name says it all."
THE TOP 100 RESTAURANTS IN TAMPA BAY, ACCORDING TO YELP
Tampa Bay Business Journal, August 31, 2015

"Its casual environment, succulent BBQ chicken and famous baked beans (with a dash of cinnamon) makes Al’s Finger Licking Good Bar-B-Que truly rave-worthy. As a 2014 Best of the Bay Award Winner by YELP*, which rated the joint a Top Rated BBQ Restaurant in Tampa, Al’s has earned its commendations.

Stop by for Turkey Leg Thursday and while you’re there make sure you try their unique collard greens, which have a kick of spice in them. Fridays promise Tia’s TGIF Mac and Cheese, which the locals go nuts over."
*Correction: The Best of the Bay Award was from Creative Loafing.
﻿﻿﻿﻿1﻿5 TAMPA RESTAURANTS THAT WILL BLOW THE TASTE BUDS OUT OF YOUR MOUTH﻿﻿﻿
2. Dive Into Al's Finger Licking Good Bar-B-Que﻿
Movoto Insider: Tena Moore
"This southern American barbecue joint in Ybor City always hits the mark. It’s in a cute little house and has a super comfy and laid back atmosphere, just as a barbecue joint should have. Their smoked meats are tender, flavorful and will actually make you lick your fingers, repeatedly, and no one else will judge you because they’ll be busy doing it too. Go for the gusto and get a half slab of ribs with some of their sides: lip-smacking baked beans, spicy collard greens, black-eyes peas, mac and cheese and always, always get a side of their cornbread. Best barbecue in Tampa.""
﻿﻿CREATIVE LOAFING FOOD ISSUE 2014 / THE CL STARS GUIDE﻿﻿﻿
﻿Jon Palmer Claridge’s best-reviewed restaurants from 2012-2014, from 3.5 stars on up.﻿﻿ 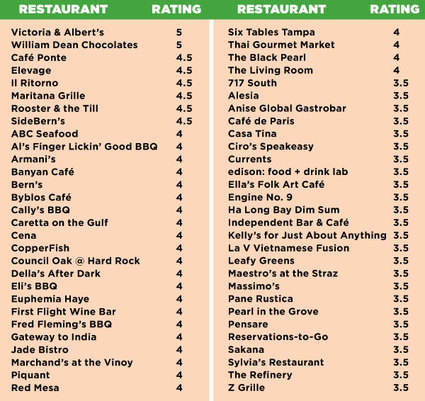 "Each week I hope to capture the dining experience, both good and bad, using Goethe’s three questions: What were they trying to do? How well did they do it? And finally, was it worth doing?

The answers to these questions translate into my five-star system as follows:

While Tampa Bay currently has no world-class restaurants, there’s one in Orlando (Victoria & Albert’s at Disney’s Grand Floridian Resort), and there’s a five-star-worthy chocolatier in Belleair Bluffs.

And as the CL Stars Guide list demonstrates, we’ve got plenty of terrific food.

This list shows restaurants that I rated at 3.5 stars or more from mid-June, 2012, when I began reviewing for CL, to the first week in June, 2014. Any restaurant getting three stars or above is one where you can confidently spend your money. But for the purposes of this guide, we made 3.5 stars the cutoff point, indicating restaurants going the extra mile to be more than just good — good-plus, if you will.

So check the list, read the reviews at cltampa.com/food, and see what you think. Flaws that bother me might not be a big deal to you, while tastes I swoon over might leave you cold. This guide may confirm your opinion of your own favorite places, or lead you to places you’ve never tried.

In any case, get out of the house to try something new. A world of exciting flavors awaits you.

Note: I’ve yet to dine at a few restaurants that, by reputation, are likely to have made this list if I had. So, Mise en Place, Restaurant BT, Pellagia Trattoria, Yummy House and others: I look forward to making your acquaintance." 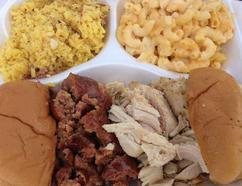 Over 300 guests attended the 7th Annual Ybor Aficionado Days Tapas Trail on Saturday April 13th.  Foodies from the region partook of Tapas at eighteen of Ybor's diverse restaurants from one end of the District to the other.

On Sunday the ultimate Spanish Brunch was held at the world famous Columbia Restaurant, punctuated by our "one of a kind" amateur Tapas Cooking Challenge.  "We are very proud to announce that the winner of this year's Tapas Challenge is Victoria de Bruin, a student in the Sickles' Culinary Program under the instruction of Chef Richard Ceglio," said Andrea Gonzmart, Aficionado Committee Chair.  "Her Savory Goat Cheese Panna Cotta with beluga lentil relish won the judges' vote and the $500 first prize."

The 7th edition of Ybor Aficionado Days was presented by Bright House Networks.  Major Event Sponsors were the Columbia Restaurant and the Hampton Inn & Suites.  "The Chamber's Tapas Trail is one of the only events of this type in the country," said Tom Keating President & CEO of the Ybor City Chamber.  "I want to thank our hospitality members for making this such a successful promotion for the community!" 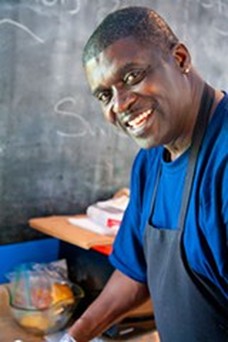 "...Al’s bright yellow Ybor bungalow is full of charm, including a sign that the men’s restroom is “outside to the right.” Check out “fall-off-the-bone turkey leg Thursday.” The service is quick and friendly, with amazingly juicy turkey breast, and smoky shredded brisket and pork. The famous mac & cheese is indeed comfort food, if too soft for my taste. They only offer a single sauce, but the meat is so moist and flavorful, it doesn't matter.

And the ribs are so good you may have to atone!

So, it is ordained that in all four of these Bay area BBQ cathedrals, St. Louis-style ribs are the one true meat. I was always a pulled pork acolyte; but now the ribs practically have me speaking in tongues. After a lifetime of unwavering faith, I have to confess to being an angel of BBQ ecumenism (with or without sauce)." 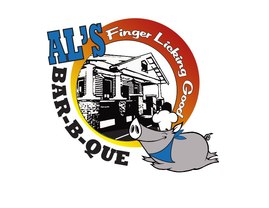 "The food coming out of here is the stuff of legend in Ybor. Order the “fall off the bone” turkey leg on Thursdays or the mac and cheese on Fridays."
Powered by